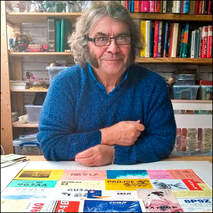 Ian Williams' working life began in the Royal Navy where he served as a Russian linguist. Leaving the navy, after 9 years, he was approached by the UK's very own MIB - and that didn't end well.  Ian would be happy to tell you why but then he would probably have to deploy lethal force.  However, he went on, successfully, to spend most of his career as a Creative Director, Writer and Producer within the film and television industry. He has won awards both here in the UK and in the United States for his work with computer animation.

Eventually Ian decided to opt for a less frenetic but no less demanding occupation and became a full-time artist.  He works with a range of materials from painting with acrylics, inks and watercolours to collage, photography and digital compositing in order to produce visually engaging originals and prints.

​Ian is continually building his artistic practice. His work has been short-listed for the National Open Art competition 2-years running; he has sold work to private individuals and via a number of galleries here in the UK, Europe and the United States.